Our past outreach events include:

Dialogue ahead of Kenya’s 2017 Elections

On 24 August 2016, the Rift Valley Forum and MeCoDEM brought together politicians, journalists, civil society activists and academics to discuss the nexus of media, civil society and politics in the context of the 2013 political elections and the 2014 anti-terror operation Usalama Watch. The full-day workshop was themed “Communicating in Troubled Times: A Conversation on Media and Democracy ahead of the 2017 Elections” and included three panels that reflected on what went right and what went wrong during these critical events that tested the resilience of Kenyan democracy. The discussion also sought to offer insights and food for thought ahead of 2017 elections by identifying best practices and highlighting critical issues.

For more information and the workshop programme click here 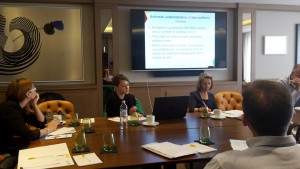 In dialogue with journalists and activists MeCoDEM’s team at the University of Belgrade shared its findings on the 2010 Pride Parade on 15 March 2016. The event was another great opportunity to build bridges between research and practice.

A press kit with summaries of the findings is available for download:

MeCoDEM’s bridging dialogue in Cape Town on 22 Feb 2016 was an excellent opportunity to share our findings on South Africa’s Community Protests with a wider audience. The event involved presentations by MeCoDEM researchers and led to fruitful discussions with journalists, activists, scholars and students.

See below for the press kit and slideshows of our presentations: